What is a Toggle Clamp?

A toggle clamp is a quick-acting mechanical linkage with three basic elements. These are:

Actuating the clamp first moves it into position, then applies clamping force by compressing or stretching the linkage elements after contacting the workpiece, then locks it by moving the toggle action's center pivot past the centerline of the other two pivots, against a stop. The lock achieved by the movement of the center pivot past centerline is referred to as the "toggle lock."

What does the term "Clamp Action" mean?

A clamps "action" refers to the basic function of the clamp and the direction in which it is designed to apply both its clamping and holding force. Typically there are multiple "styles" within each action group.

What is Air Operated Action?

Air Operated Clamps function like their manual counterparts but are activated by a pneumatic cylinder instead of manual force.

What is Hold-Down Action? 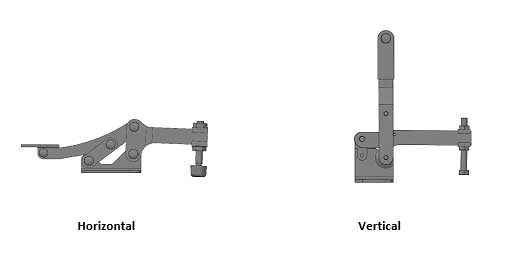 What is Linear Action?

Linear action means the clamps apply a pushing or a pulling force parallel to the clamps mounting surface. They are typically used to draw two elements together or to push a workpiece against a solid stop. 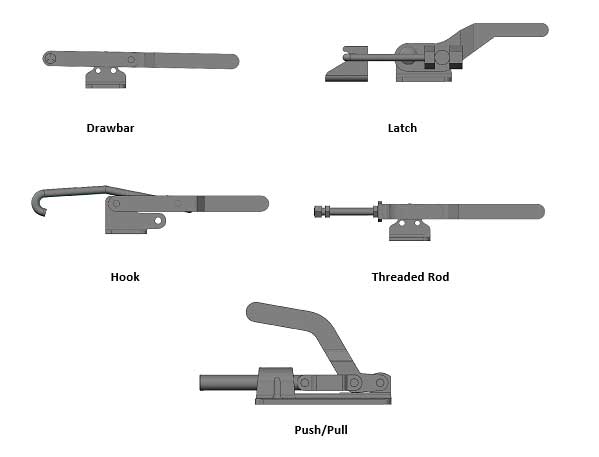 What is Squeeze Action?

Squeeze action means the clamps apply a compressing force on parts placed between the clamps upper and lower jaws. They are typically uses to pinch workpieces together or to secure a workpiece to a surface.

Squeeze action clamps are available in Plier and C-Clamp styles.

What does Holding Capacity mean?

The "holding capacity" listed for each clamp refers to the maximum force that clamp can withstand in its locked position without any permanent deformation. For hold-down clamps, holding capacity is typically measured with the spindle as close as possible to the toggle action unless stated otherwise in the clamp specs.

What is the Clamping Force?

Clamping force is the amount of force actually applied to the workpiece by closing and locking the clamp. Typically the maximum clamping force is about 80% of the clamps total holding force.

What is Applied Force?

What Finishes do Lapeer Manufacturing Clamps have?

The finish on most of the KNU-VISE clamps is Blue-Brite zinc which conforms to government specification QQZ325 Type I Class III environmental standards.

Most WOLVERIENE clamps and some spindles and rivets on KNU-VISE clamps have been Black Oxidized in accordance with ASTM D769.

What are Positive Lock (-P) Clamps?

Certain WOLVERIENE and KNU-VISE clamps are available with our Positive Lock (-P) feature. This is a secondary mechanism that locks that clamp in the open or closed position and requires activation of a separate lever before the clamp can be moved from that position. This system is used in applications where it’s likely the clamps could be accidentally operated or where the clamp is exposed to repeated or extreme shock or vibration that might cause the toggle lock mechanism to spring open.

Do you have questions?
Are you a new customer?
Would like to request a quote?
Please Contact Us